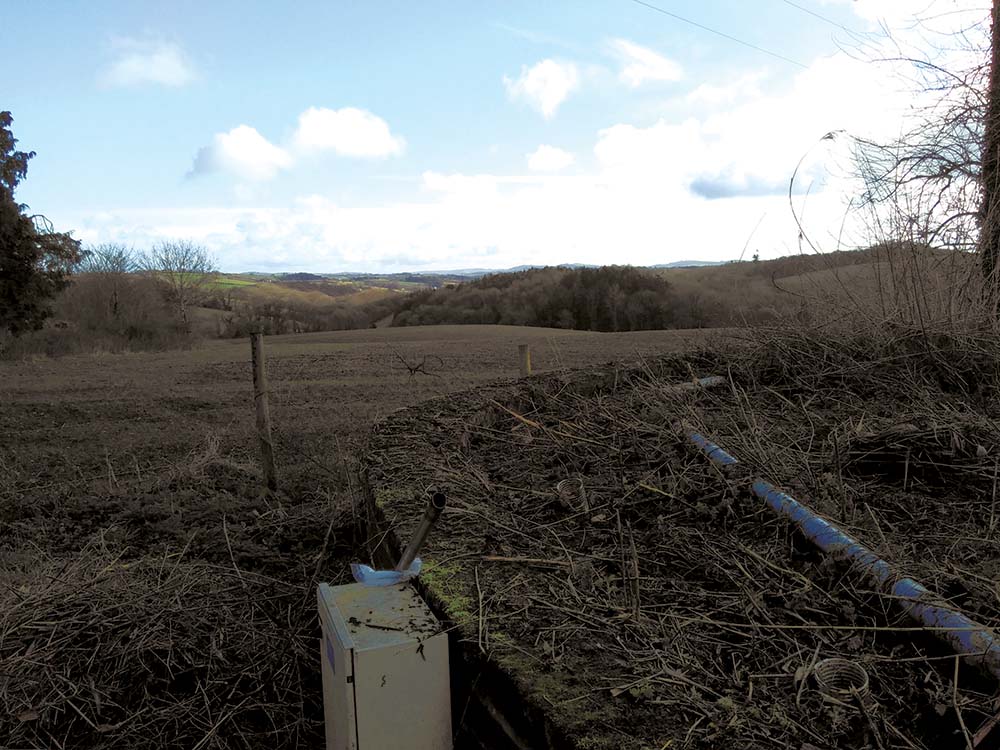 The reed beds in winter – the reeds have died down and will regrow in spring. The view is rather nice.

Another blog post about living in a community co-operative

I’ve started writing blog posts about living at Beech Hill Community Co-operative in Mid Devon, where I’ve been living since September 2016. People seem to like them so, well, I’ll keep going for now…

This one’s about work – specifically, the responsibilities entailed with living here.

It’s cheaper to live here than in the Real World and part of the reason for that is that a proportion of our rent is paid in labour. We’re supposed to contribute two days or 16 hours a week to the co-op, and it doesn’t really matter if that’s two and a bit hours a day, two full days in the week or a seven day week a month, as long as it gets done. No-one is counting your hours and it’s up to you to make sure you do them. There is always plenty to do here.

People are very good at doing their allotted amount to the point of feeling guilty about taking time out and sitting in the sun reading a book while someone else walks past with a wheel barrow. I think that is probably the biggest problem here. People were feeling that they had to leave the site to have a break and damnit, we live in a picture-postcard manor house with glorious grounds and a camping paddock and a swimming pool and I want to enjoy it.

So at a co-op meeting I suggested – and got agreement for – the concept of a Beech Hill Holiday, which is when you take a week off from doing anything at all for Beech Hill and you announce this at the weekly meeting and so everyone knows you are on holiday and they don’t ask you to do things and you can lie around talking to the chickens and admiring the rooks and being grateful for living somewhere so glorious.

Much work, but very little of it *feels* like work.

Regular jobs for me include:

There are loads of things other people do that I don’t – I’ve never mowed the lawns, for example. But these are things I have done. There’s probably more.

It takes a good while to work out how you’re going to divide up your time. And you might want to divide up your time in different ways at different parts of the year. In May and June, when everything is growing, you might want to spend at least an hour every day in the polytunnels and veg patches. Owing to paid work and master’s commitments I did very little at the end of November and the first half of December, and then just before Yule I spent over a week wallpapering and painting a corridor.

And there are meetings, where Things are Decided. And you volunteer to do jobs at the meetings, and put your name down to do a certain thing at a certain time. You get very good at keeping a diary here. It can be hard work, and I wouldn’t like to be working full time and living here. Most people here work part-time, or are retired. Which is why it has to be cheaper to live here. 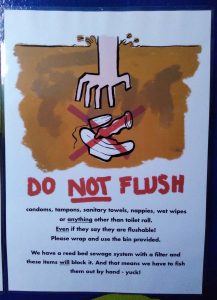 Our assertive signs. Designed and illustrated by you-know-who, with a nod to Saul Bass

The worst thing I’ve done here was fixing the reed bed sewage pumps. Our reed beds, because they are not on enough of a slope, require pumps to get the liquid into the beds for filtering. If some utter, utter bastard ignores all the large assertive signs in the loos and flushes a condom, a tampon, a wet-wipe or basically anything other than what came out of their body and/or toilet roll, the filters for these two pumps gets blocked, seize up and trip a circuit board. The circuit board needs checking once a week and sorting if blocked or the sewage chambers fill up and can back up the system. Use your full and vivid imagination to work out what happens when our sewage system gets blocked and decides to back up.

The person who used to keep an eye on the reed bed circuit boards & pumps died at the end of October, so I volunteered to try it, on the condition that if it was like something out of a Korean horror film I could absolutely say fuck off I am not doing that again.

I bought some really long super-strength gloves and some masks that say they keep out bad smells, but this turned out to be a marketing lie. I pulled on overalls and another community member volunteered to help me, which was brilliant as I don’t think I’d have been strong enough to hover over the manhole to the sewage chamber and pull up the pumps, which hang from ropes inside the chambers. I probably could have done it but it might well have broken me, and nobody wants to be broken while lying next to a feculent void wearing an odour-preventing mask that tells basic marketing lies. He pulled up the pumps, we hosed them off and I unscrewed their bases and pulled out – not tampons, not sanitary towels, not wet-wipes but… beautiful mats of fat-covered hair. I screwed the bases of the pumps back on, we flicked the circuit board switch and both pumps buzzed into life, ready once more to obediently pump our shit.

But it wasn’t that bad, really, especially seeing as there was two of us doing it.