Consensus, or, how we get things done 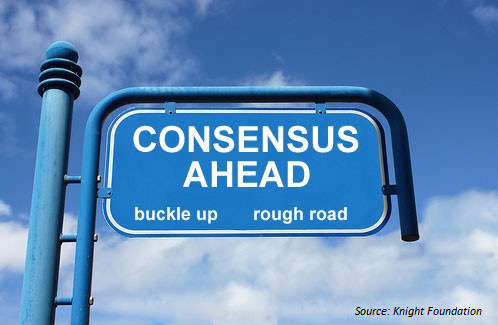 Consensus means that we all agree on what we do. There are many different ways of achieving it, and the way at Beech Hill is this:

Why not voting? Well, I think we can look at exhibit A, labelled “Brexit”, and exhibit B, labelled “Trump”. What consensus does, or should do, is get past binaries of yes or no, with us or against us. We are open and honest about any given subject and listen to all sides of an argument carefully (cf: Brexit; Trump) and try to work together to find a solution that works for everyone. It’s not about what – or whose – side you’re on, but how we can find a way forward together.

I decided to write this post, partly because when I asked people what they wanted to hear about on my facebook page that was one of the requests, and partly because I was thinking about something that came to the meeting recently. One of our members had suggested a change which she was really excited about but which, if left unchecked, could seriously affect the quality of my life at Beech Hill. Here was the difficulty: I totally understood her position and what she was excited about and I felt that I would be a miserable nazgûl bastard telling her DO NOT WANT. 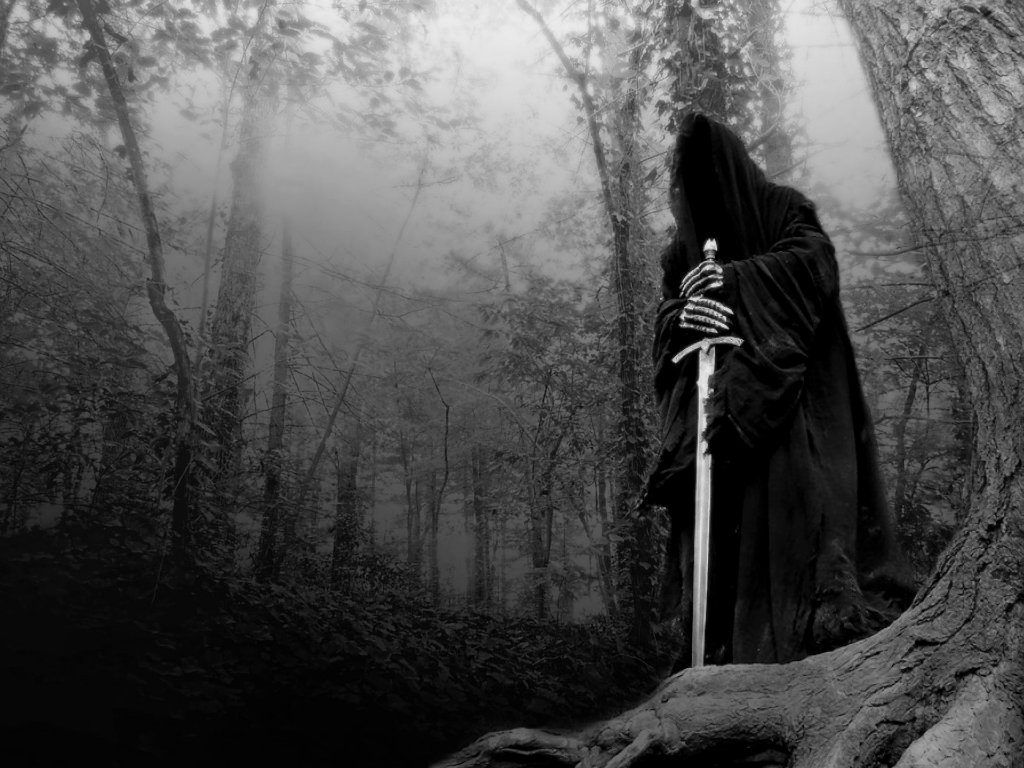 She had done the thing of telling me in advance of the meeting so I could think about it, and thus, having lain awake thinking about it, I tentatively approached one of the longest-serving co-op members and asked her opinion on the matter. She showed me hers and I showed her mine and we talked about it. She thanked me for my honesty and I thanked her for her advice and she then told me I should share my feelings about the plan in the meeting. Before the meeting I talked to two more community members about the plan – one had come up with a “solution” that would have been even worse for me (argh) and the other shared my concerns and had more of her own.

At the meeting we were all open and honest about how we felt about the proposition and we agreed that it could go ahead but with certain caveats – that my concerns and the concerns of others were prioritised.

What is important about this system is the numbers required to make it work. In my tenancy we’ve had between 9 and 13 members (I think) and 13 is about capacity given our current accommodation. If we had 20 members the current system might become unwieldy, and we might look at other ways of achieving consensus.

People always ask this and come closer, dear reader, and I will speak truth to thee: the One In Charge is… everyone. Really. There’s no boss, no leader, no one person (or group or clique) that Decides. I was actually astounded by this when I joined. My ideas, even before I became a co-op member (there is a trial six months of living and working with Beech Hill full time before you can join) were taken as seriously as anyone else’s, as were my opinions and objections. Everyone’s thoughts are valued. If there is someone who has some expertise in a subject then their opinion is given a bit more weight on that particular subject – if we need to fix the roof we pay attention to what the co-op member who is a builder says. That’s just common sense.

No decrees are issued – everything is debated. It takes more time and can be frustrating but it means that everyone knows the reasons for any particular decision and everyone consents to it.

Probably the thing that goes wrong the most is when we all come to a decision about something and then a few months down the line the decision is forgotten and needs to be remade. And that’s a waste of time. You might get bored with emptying mouldy half-cans of baked beans from the fridge and get agreement from everyone that things in the fridge are put in tupperwares and labeled with the date, because, you know, food hygiene is a lovely thing. And yet, six months down the line, what is this festering at the back of the fridge? Why! It is half a can of baked beans.

The other thing that goes wrong is that sometimes people take it upon themselves to do something that they really should ask the meeting about, and they don’t. You don’t have to achieve consensus for every little thing – I got given a bird box and put it up on the grounds without asking a single other soul. But that’s a little thing. After living here for nearly a year and a half I have a good idea of what requires agreement and what doesn’t… 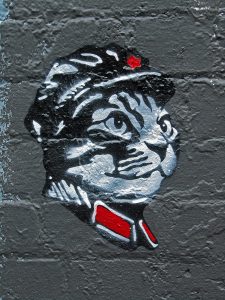 Benevolent dictatorship,
or, how not to do it

This is how I will run the world once I am swept to power but it is not appreciated at a community co-operative.

One time I made the mistake of accidentally redecorating a corridor without running the colours etc past the main meeting. Oops!

What had happened was that I had booked some time off paid work before Christmas, months in advance, to do this work. And then one of our co-op members suddenly died at the end of October so we spent the time after that organising the funeral, grieving, working out who was going to take over the really important jobs he did, and generally only dealing with the really urgent important stuff. And so the week of decoration loomed up on me and, though I’d shown the colour palette past a few people, and was naturally confident that it would look amazing because colour is my hecking job, I didn’t actually announce to everyone when & how I was going to do it. So I’m there, up a step ladder, brush in hand, cutting in a lovely dusky pink over the old acid green, and other co-op members are, oh, you’re painting the corridor? I didn’t know that was happening!

I was clearly headed for trouble. At the next co-op meeting my guerrilla decorating was raised and I threw my hands up in surrender and admitted I was in the wrong and pleaded extenuating circumstances and promised never to do it again.

It’s all okay, though – everyone agrees that the corridor looks lush.