Book Illustration: Bridget and the Fox 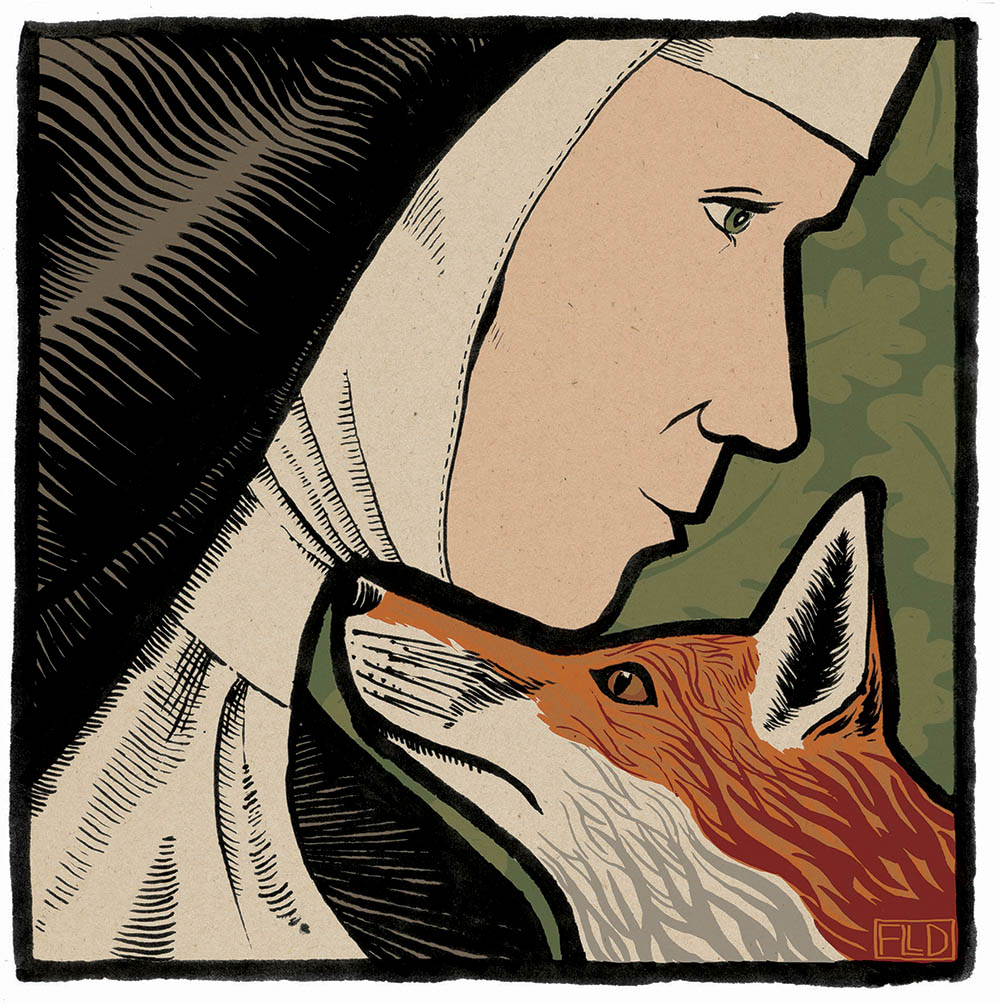 Jane Russ is author of the upcoming Selkie story and thus commissioner of the book illustration work I’m currently beavering away on. She’s written a companion piece to The Hare Book (Graffeg, 2015) which will be published later this year and will be called The Fox Book.

She asked me to create an illustration for the new book based on the old folk tale of St Bridget and the Fox. The story is about how the canny animal-loving nun and a fox work together to save a condemned man’s life. 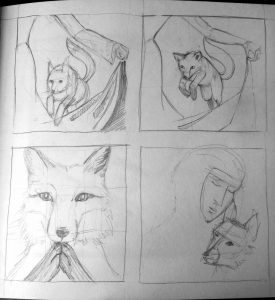 I came up with some rough scribbles – some of the fox performing tricks, as he does in the story, one of the fox praying and another of the faces of both. Jane and I decided that working on the fox and the nun together would make a powerful image.

I played with different ideas of having them together, initially positioning them in a rather mischievous “madonna and fox” pose, but let that go and worked out something a lot more interesting.

Red in tooth and claw

The commission came at an interesting time – just the day before, a young dog fox had killed half of our chickens in broad daylight. Naturally I found the deaths upsetting but still, part of the natural order of things. If we as a community wish to keep chickens then the risk of predation is one we must take and we have been very lucky – the last fox incident was four years ago. The chickens are well locked up at night and so it seems that May is the month when hungry young foxes take the easier, if riskier, option of plump free-range hens from a house with 16 humans and four dogs to contend with. 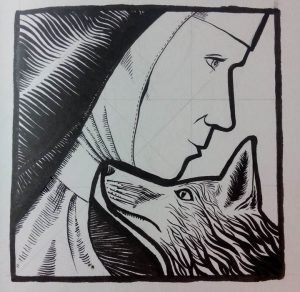 I have always loved nature and foxes have fascinated me since I was very small, but this incident reinforced my belief that to make these animals uniformly cute or cuddly is to deny their essential nature – yes, they are beautiful, intelligent, playful and adorable to our eyes and yes, they are killers. I wanted to show intelligence but also wildness in the fox – an uncompromising potential for ferocity. Here, the kindness and quiet wisdom of Bridget is poised with the fiery nature of the fox – both self-possessed and determined in their own ways and both capable of working together to an end; yet each is a very different animal from the other. Anthropomorphising animals does them no favours – nor us.

Thus, am very happy with this book illustration. Jane’s husband thought it “very Eric Gill” which is a compliment of the highest order!

National Museum Wales asked me to create exhibition illustrations for their family-friendly Wriggle! event. They are designed to engage younger children and aid education and interpretation of the exhibition. 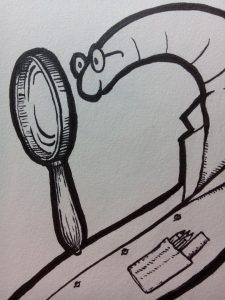 I’ll share a longer post about the actual creation of the illustrations on the opening of the exhibition – watch this space!

Suffice it to say that the curators at the museum gave me an excellent, well-thought through brief where they described their worm character, how old it was, what it liked to do and the impression they wanted it to give.

I came up with four different worm characters and we edited until we had one that worked. They then gave me the six poses they wanted the worm to be drawn as – superworm, scientist worm, old worm, swimming worm, awesome worm (on a skateboard, of course) and digging worm. I managed to create an image of a cartoon worm, with no limbs, digging with a garden spade. I am rather chuffed about that.

Once the worms were drawn in pencil, I inked them up using a Japanese brush pen. They needed to be fairly big, so they were created on A3 paper. They were then scanned, and then cleaned up and coloured in Photoshop.

Because the exhibition illustrations were to be huge, I then took the coloured-up worms into Illustrator. I live-traced them into highly-detailed vector images, meaning that they can now be used as big as the Museum needs them with no deterioration of quality.

The worms will appear on mugs and t-shirts and billboards across Cardiff. The exhibition will run from the 18th June to the 30th September 2016 and will be at National Museum Cardiff in Cathays Park in the city centre. I can’t wait to see it!

Interpretation is the name given for the content produced by museums, galleries and so forth which helps to explain what they have on display and why.

I’m currently working on an interpretation tender submission for a wonderful project which will involve creating a map-based family trail for a national heritage site. 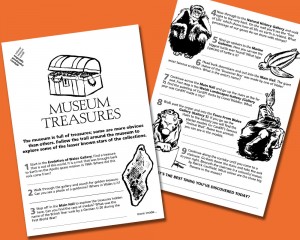 I’ve created a lot of interpretation-based work, especially for children and families, and my work is used to help engage with, inform and inspire younger people. I have a deep love for this educational work – nothing makes me happier than provoking curiosity and excitement in others, especially children, and encouraging them to learn, find out more, imagine. I am happiest when learning and it is a joy to have a job that encourages others to feel the same!

So anyway, as part of this tender submission I thought I’d ask one of my most important clients, Grace Todd who is Senior Learning, Participation and Interpretation Officer at National Museum Cardiff, whether she’d be able to write me a sentence or two as a recommendation for this tender.

I was blown away by what she wrote. Here it is in full:

“Frank has been contributing to the work of the Learning, Participation and Interpretation department at the National Museum Wales for several years on a range of projects. Frank is professional, efficient, and has an ability to understand and design what we require. Frank listens, and understands that our remit is engagement and thus their illustrations have to be engaging, they have to hook the reader in.

One of the most demanding projects that Frank worked on was developing illustrations for a children’s story book that we published about a dinosaur. Having written the story I had strong ideas about how the characters should look on the page. The story was an intrinsic part of one of our school’s workshops for 4-7 year olds, and as such needed to encourage engagement, and a sense of exploration and discovery for the pupils. Frank’s illustrations encourage children to go back to different pictures and to discover new things. They help children read characters’ emotions and interactions.

Recently Frank’s designed and illustrated learning and activity resources for a new high profile exhibition on archaeology. In keeping with the brief these were designed to increase the enjoyment and engagement of young visitors and their families. Frank’s playful, lively hand-inked drawings have really encouraged children to be creative, imaginative and spontaneous. They’ve also helped make big themes and topics conveyed in the exhibition accessible and easy to relate to for our younger visitors. Parents, teachers, and children have all embraced these resources, the feedback has been tremendously positive. The illustrations have encouraged visitors to look more closely at what’s being shown, prompted observation, discussion, curiosity and speculation.  One of the archaeology curators said she’d never seen archaeology conveyed in such a fun way!

Frank has also contributed to a lot of ‘one off’ projects for the department over the years. Our audience is varied: families, school groups across the ages, adults, toddlers, teenagers. In each instance Frank has demonstrated sound understanding of the audience and how to engage with them. We’re always asking Frank’s illustrations to work hard, they have to engage visitors, convey ‘big stories’, encourage imaginative, exploration and creativity, and help make the museum experience fun. Frank has demonstrated an ability to do this on every project.”

I’ve been a bit quiet lately on the blogging front because I’ve been working on a few big projects in the background that for one reason or another I’m unable to talk about.

But I can talk about this one now – I’ve just had official confirmation that I have a place on the Illustration MA in Authorial Practice at the world-renowned Falmouth School of Art. 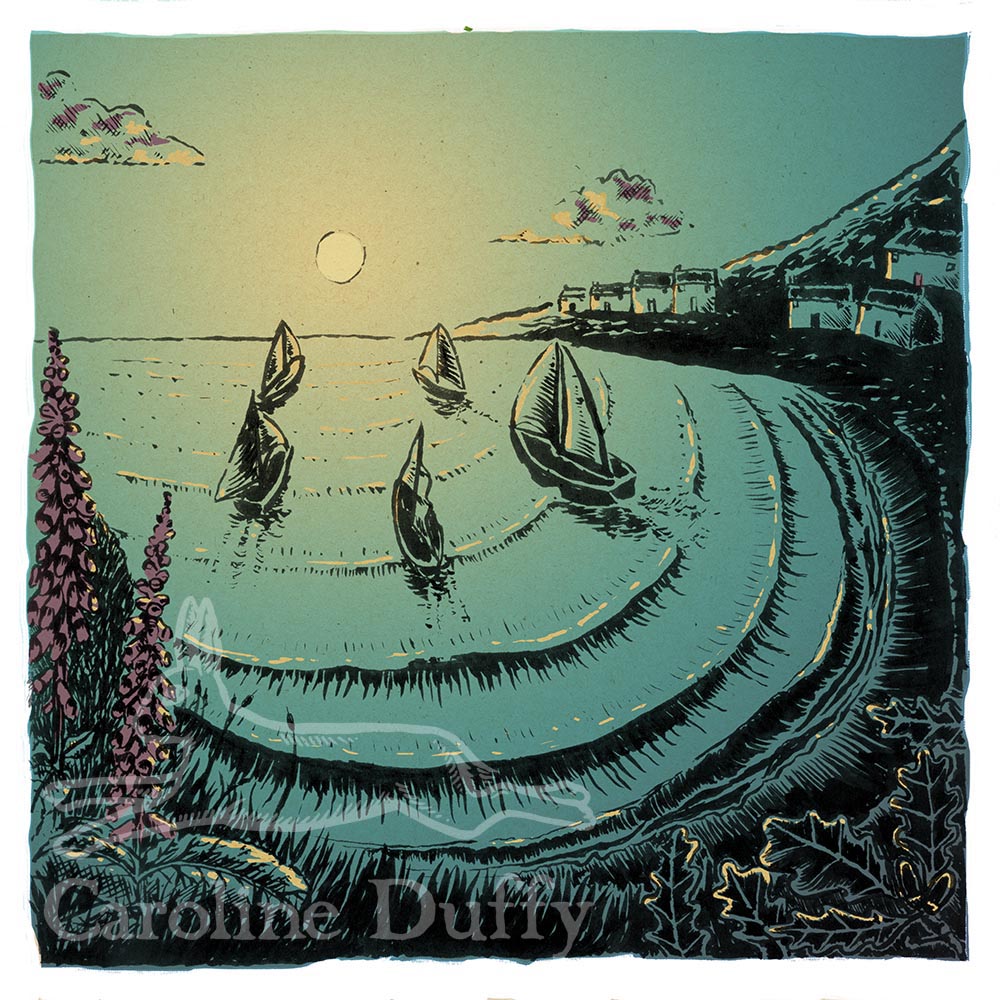 You can read up about the course description here. Moving to a housing co-op in Devon enabled me to reorganise how I work. It’s a lot cheaper to rent here than to pay a mortgage in Cardiff and this means I don’t have to work full time. And it gives me time to think.

I started to think about how I’m really enjoying illustration but that I don’t think I’m pushing myself as hard as I can go, or exploring all the outer deeper reaches of subjects. I started to think about how I’d like some external supervision, some impartial advice, some signposting around where to go next. I thought about how I love to read theory, how I adore folk tales and their effect on our psyches and my fascination with psychoanalysis and symbols and mythology. And I wondered if there was a master’s in that.

A google of illustration masters’ degrees and Exeter (my nearest university) took me straight to Falmouth which has links to Exeter. Falmouth is where I did my first degree, graduating in June 2000, and I had an uneven time there (most of which wasn’t the fault of the town). I was deeply ambivalent about returning. But after speaking with a friend who’d done her MFA there my curiosity was piqued and I decided to apply.

After applying I was invited for an open day and also an interview. Going back after 16 years was emotional but I fell in love all over again with the location, the ethos and the facilities (not to mention that it’s about 10˚warmer there than everywhere else!) They’ve a huge screen printing room, a litho set-up, courses in metal and wood engraved printing, life drawing, a fabulous library and it’s all set in a tropical garden by the sea.

I was nervous about the interview and had genned up on a lot of theory, spent a day in Exeter University Library stealing an education and generally reminding myself of all the things and more that I’d learned at my undergrad degree all those years ago. But I needn’t have worried. The interviewer was passionate about environmental and animal rights and felt that illustrators had a duty to report what was going on in the world. Suffice it to say we had a lot in common. He offered me a place there and then (but I’ve waited until receiving the emailed official offer to announce it!). So yeah, exciting stuff!

The course starts on September 18th 2016 and is two days a week. I plan on driving the two hours down to Falmouth first thing Tuesday mornings, spending the whole day working on the degree, sleeping in my camper van over night, working all of Wednesday and then driving back that evening. Hopefully I’ll be able to get all of the course work done over those two days, leaving me the rest of the week for paid work (because I’ll still need to pay the rent!), housing co-op work and other stuff.

Financially-speaking hopefully I won’t be out of pocket – this is the first academic year where you can get a student loan for a master’s degree. Over the two years of the course I can borrow £10,000 and this will pay the course fees and also the extra fuel involved in driving to the end of Cornwall and back once a week. Fabulous!

I can’t wait to get started. Who knows where my practice will lead me…